“God is to be known as the deepest ground of our being,
concealed in the innermost part of our nature,
but there nevertheless to be seen and contemplated.
This contemplation will have its influence in our live
for He will reveal Himself in our works.” 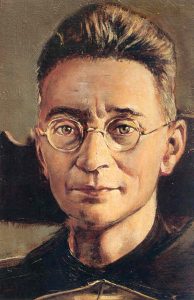 Saint Titus Brandsma (1881 – 1942) is one of the most inspiring Carmelites for the contemporary world. Churches, schools and streets are named after him. He was born Anno Sjoerd Brandsma in 1881 in Ugoklooster, a hamlet in Friesland near Bolsward. He later chose Titus as his monastic name.

The socio-economic deprivation of Frisian Catholics had a major impact on Titus Brandsma’s life. His commitment to the emancipation of Dutch and Frisian Catholics, especially in the fields of education and journalism, had its origins here.
At the age of 17, Titus chose to enter the Carmelite Order. Already in the first years of his monastic life, he came into contact with mystical writings. It was in the area of the study of mysticism and spirituality that his greatest achievements would later lie.

In 1923, Titus Brandsma was appointed professor of philosophy and mysticism at the then established Catholic University in Nijmegen. He pioneered the collection and description of medieval mystical writings. However, his interest was not only studious. He was deeply moved by people’s personal relationship with God, as his 1932 rectorial address showed.

In the 1930s, Titus Brandsma warned on many occasions against the dangers of rising National Socialism. After the occupation of the Netherlands in May 1940, Titus continued to resist, especially through education and journalism. On 19 January 1942, he was arrested by the Gestapo and accused of sabotage activities. Several weeks of interrogation followed at the Sicherheitsdienst office at the Binnenhof in The Hague. During this period, he wrote, among other things, My Cell. Not long after, his final journey began, via various prisons, towards the Dachau concentration camp. Here he died on 26 July 1942.