Only 28 years after the restoration of the Catholic hierarchy Titus Brandsma is born in 1881 in Oegeklooster, a hamlet of the town Bolsward, in Friesland. He was given the first names of Anno Sjoerd.

In the Frisian Catholic milieu of those days the own identity was anxiously maintained. The fear of being influenced by the largely non-catholic population was present everywhere. In the farmer’s family where Titus was born a spirit of piety and prayer was dominant, remarkable even in those days. Especially Titus’ mother greatly preferred Catholic isolation. The family lived an introspective, sober and orderly life. This has formed Titus and inspired him to choose religious life. The choice was almost natural in this family. His brother and four of his sisters chose to enter religious life. Only one sister married. Anno Sjoerd started his novitiate in the Carmelite community of Boxmeer. 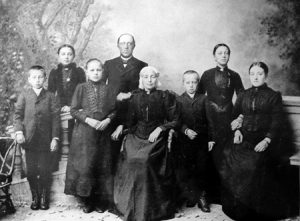 Besides the concern to maintain their own identity Catholics were also driven to progress. Titus has written sometime: “I have the privilege to descend from a family which warmly sympathized with what moved forward the cause of the Frisian Catholics”. Catholic Dutchmen had to catch up in several areas around the turn of the century. There were only few Catholics in government positions and they generally lagged behind in the socio-economic field. Therefore, the Catholic emancipation movement knew next to the religious also a socio-political dimension. This has greatly influenced the life of Titus Brandsma. Brother Titus wrote in 1904: “Who wants to exercise influence, must make sure he has the right to this influence; who strives to regulate relations, to help shaping society, have influence on the general course of events, must be able to contribute matter, just as good or even better than his rivals. In this way he earns the right to cooperate”.

During his time of studies in Rome Titus was also taught by the sociologist Pottier at the Leonine Institute. Even before leaving for Rome he had written a series of articles, published in the Katholiek Sociaal Weekblad (“Catholic Social Weekly”) about the Catholic Church and societal issues. Herein he expressed his understanding for socialism as a “passionate expression of discontentment, created by injustice”.