Professor of Philosophy and Mysticism 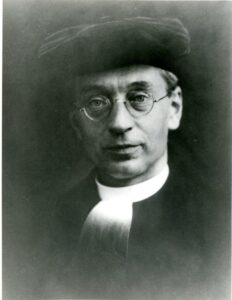 In 1923 Dr. Titus Brandsma was appointed professor in philosophical disciplines at the Catholic university which was founded in that year. The foundation of this university was seen as a highpoint of Catholic emancipation. Titus Brandsma has made a lot of efforts for the foundation and expansion of this institute.
The task given to Titus Brandsma also included the history of mysticism. Especially in this discipline he has been doing pioneering work. Soon after the foundation of the university he founded the Institute for the History of Dutch mysticism. Some years later he is among those who took the initiative for Ons Geestelijk Erf, a magazine for the study of piety. Next to these publications appeared textual editions of mystics from the Netherlands which aimed to make these products of medieval spiritual literature known and felt by the Dutch population. Titus said: these texts are “beautiful but not easily understood and appreciated because of their archaic language. This endeavor is remarkable in a time when mystical literature was somewhat suspected.

In 1927, Titus Brandsma started the very important work of collecting, describing and copying “Middle Dutch” spiritual literature, which was scattered all over Europe.
In 1938, he had put together in more than 170 albums a big collection of photo copies of texts from about 60 manuscripts. In the framework of the research in the field of mysticism he organized four study congresses. He made many publications, often for a wide readership about his research and findings in this field.
Students have mentioned that his classes on mysticism differed greatly from those in philosophy. In his course on mysticism something came alive in him which was noted by his students. Godfried Bomans wrote:

“I see again Titus Brandsma, his eyes looking over our heads to the far horizon of the almost unspeakable and his soft, somewhat monotonous voice trying to find that “Clara atque distincta” of Descartes that was so dear to him. His finely chiseled and spiritual head I see again in the frame of the window that showed an unkempt garden full of chestnut trees”.