The life of Titus Brandsma shows a multitude of activities and a great deployment of his capacities. Already at a young age his inquiring spirit and a great urge to work are remarkable. He is intelligent, expansive and driven. However, he was also and above all a very observant monk. He remained as much as possible in his cell and did a lot of work for his religious order. At a rather Young age, in 1912, he is appointed to the council of definitors of the order of Carmel. This made him influential in his order.

The life of Titus also shows great silence and his limitations. Again and again his expansive nature was called to a halt. Already in the minor seminary he could not be as the other boys were. He had to rest more and get more nutrition. The active life of the Franciscans with their stations and parish work did not fit him. It showed him the way to the more contemplative life of the Order of Carmel.

In the Order of Carmel Titus found the silence of the cell. For the Carmelite the cell has to become an essential part of his life, it has to be “owned”. “Each one of you is to stay in his own cell or nearby, pondering the Lord’s law day and night and keeping watch at his prayer unless attending to some other duty” is written in the Rule of Carmel. In his cell the Carmelite learns that he does not make his life, but that he is a guest in the life given to him. It is a purification that aims to develop a greater capacity to receive God. The cell helps to open up to oneself, so inner movements can be distinguished and purified. The cell, too, keeps one occupied in order that the monk does not scatter but is directed more and more to the One. When Titus is 17 years old he writes to his parents:

“I am very happy in my cell or among the brothers, as is required from me […]. I believe that God has called me here. But pray well for me so that I may know if I am following his Holy Will for me. And if by chance, He has not called me, what I, however, don’t believe and hope, because it is a great fortune, may I then know what I have to do to please him. But as I said, I am happy now”. 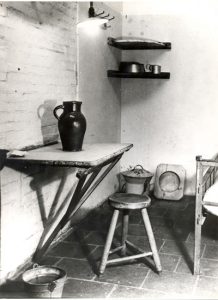 Only at the end of his life he would share again about his happiness, in his prison writing Mijn Cel (My Cell). When he has described his prison cell in  details, the now 60 years old prisoner writes on January, 1942:

“Beata Solitudo. I’m already completely at home in that little cell. I have not yet been bored, on the contrary. I’m alone there, yes, but never was our Lord so near. I can exult for joy that he made himself found again by me, without me going to people, or people coming to me. He is now my only refuge and I feel safe and happy. I want to be here always, if He so decrees. Seldom have I been so happy and content”.

In this cell Titus found his calling and destiny as a Carmelite.  He had written three years before about his calling: “”In the calling to the Order of Carmel is included the calling to the mystical life as a gift of God, a pure gift of God, but as a gift that He wants to give to those called to Carmel, if they only open their heart to Him and make themselves receptive for this extraordinary divine blessing.

The cell with four walls is not just the only cell which has existed in the life of Titus Brandsma. Also in another way a person can be limited or be thrown back on his own resources in order that a greater receptivity is born. Many of those forms are brought in by life itself. This happened when the intelligent and inquisitive Titus was not allowed to study in Rome and was given a simple and administrative task. For a short while his scientific formation was brought to a standstill. Initially there was no perspective of change. Later on Titus called “it one of the many lessons he needed”. He did not talk much about it later but it must have been a painful experience. Titus” weak health forced him often in all of his life to a state of separation and passivity. It soon became clear that the hectic daily schedule in novitiate was too much for him. He was not allowed to join the night office prayers and he had to pray matins and lauds in his room. In the second year he spits blood, a very serious symptom in those days. It forces him to take a rest of six months. During his studies in Rome he is bedridden for months with ice in his mouth and artificial feeding. This alternation of activity and forced rest will often be repeated in Titus’ life. It put him in solitude and gave him time to reflect.