God and the human being

God and the person can never be considered separated from each other in Titus’ opinion. The content of his Foundation Day address in 1932 shows that Titus is greatly concerned with the relation of people with God. He was looking for a God image that could meet the needs of people of his time who turned their back to faith in God in big numbers. For Titus “a world problem greater than that of material needs”. At the same time he gave a method to meet God. The God image he presented in this address to his audience was that of nearby, living God.

“[…] what I, therefore, defend and consider as necessary for this time is the consideration of all that is in its dependence on and origin in God whose hand we see in this, whose being we discern in it, whom we must recognize in this and adore, first of all, in ourselves. God is there and he reveals himself there to us”. 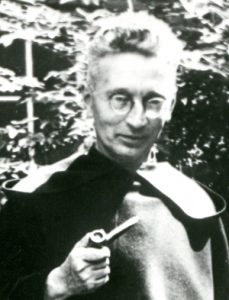 These opinions led according to Titus to a feeling of close solidarity with the neighbor. Titus says further in his addres.

“Undeniably, it pulls the individual out of his isolation and makes him see  himself in a relationship of dependence. It not only connects the person with God, but in and through and with God man sees himself united and connected with all other people. Here is a communion founded on the most profound unification of God with all that exists”.

In his speech on Heroism Titus had said: “but then all people are our brothers, even those who hate and fight us”. The consciousness of God’s indwelling in every human being must lead according to Titus to an attitude of service and peace. For him the religious person is a social person. Praying and helping can not and may not be separated from each other. “In thousands of shapes incomprehension, the need of human life goes through the world”. Titus’ eye saw in all those shapes God’s image. Father Titus was first of all concerned about God and people. According to the biographer Henk Aukes Titus Brandsma was the only priest in Nijmegen who went to the municipal social welfare office.