The end of the journey

After some weeks of stay in the prison of Scheveningen Titus Brandsma was brought to the transit camp Amersfoort on March 12, 1942. The conditions are extremely bad in that time. Hunger and maltreatment were a daily affair. The weak condition of Titus suffered much. 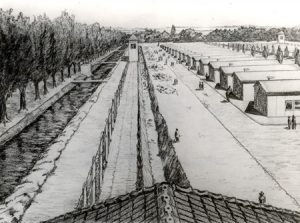 After a short stay again in Scheveningen he was transported to the prison for convicts in Kleve. After a few weeks he was brought to the concentration camp of Dachau. According to witnesses Titus kept on living his God sense and witnessing to it. It was 1942, the year that was reported in the camp records as the “blood year”. “So, death can mean salvation: there is no more fear of death, because it is better than life” wrote the Carmelite Rafaël Tijhuis who survived the camp. In that hell, however, Titus left behind on people, just as in the other prisons, an indelible impression of God commitment and goodness.

Titus, already weakened by his stay in camp Amersfoort, wants to follow as exactly as possible all the orders of the warden and ‘Stubenälteste’, but he is not fast enough. “He did not have the skill to save himself out of situations”, say witnesses later on. This draws extra attention. Many of the maltreatments are directed against him. The Carmelite Rafaël Tijhuis who survived camp Dachau writes: “Titus with his innate friendliness tries by talking to them still to achieve something … Afterwards I say sometimes to Titus, don’t talk with those guys, you won’t achieve anything, at the most a severe beating”! But then he answers: “Because of this you should not omit it, for who knows something may stick”. You often will hear him saying:”One has to pray for these people, that they may come to see”. 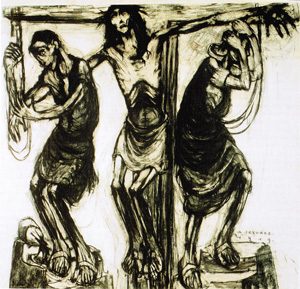 More than 20 years before his stay in Dachau Titus has written a passion meditation at the stations of the way of the cross of Albert Servaes. In this he sharply describes how the heart of man rebels against the disgraceful humiliation of the suffering. How people rather escape it, away from the cross to the triumphant redeemer of the resurrection. Titus sees, however, exactly in this extreme humiliation of someone a way. Here lights up love, when all self-orientation comes to nothing and the otherness of the Other is embraced. Titus writes at the third station:

“In your weakness you conquered the world. Let me be weak with you and bow deep under the weight of life. Be insignificant and small in the eye of the world and stand up again with you for new suffering until my death will be the crowning of my offer”.

Titus did not look for suffering. In his imprisonment in Kleve he tried to turn it away through a request to be detained in a German Carmelite community. The suffering that befell him he received in solidarity with the suffering Christ: “the most chosen fate that unites me with you, o God”, he wrote in a poem in the Scheveningen prison.

The witnesses who survived narrate how Titus kept on telling people about God’s commitment to people. His co-prisoners visited him secretly to listen to him speaking about the “Light which will give us freedom at the end of the dark tunnel”.

On July 19 Titus has been admitted to the ‘Revier’ (camp hospital). An anonymous source states that experiments were done on him. “He has been humiliated and disgraced”. After a few days he became unconscious and was then ‘abgespritzt’ (given a lethal injection) on July 26, 1942 at  2:00 pm. His commitment to God and love of humankind has left an indelible impression on many.